3D
Scan The World
2,696 views 200 downloads
1 collection
Community Prints Add your picture
Be the first to share a picture of this printed object
0 comments

This imposing lion once guarded the entrance to a pyramid-age sanctuary. As most powerful predator of the steppes bordering the Nile Valley, the lion was a symbol of royalty from early on. The animal - especially the female - also embodied a number of deities. This work is the earliest extant example of a lifesize lion statue that is almost entirely preserved. It was excavated by the British Egypt Exploration Fund in 1891, at Herakleopolis Magna in the Nile Valley, southeast of the Fayum oasis.

Granite, muzzle is a modern reconstruction. 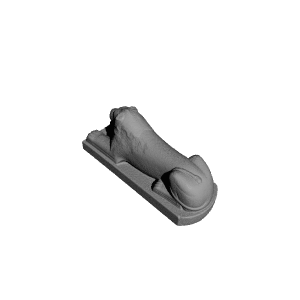