Red Granite Figure of Roy at The British Museum, London

3D
Scan The World
4,012 views 184 downloads
Community Prints Add your picture
Be the first to share a picture of this printed object
0 comments

Red Granite Figure of Roy at The British Museum, London

The cult of Amun was central to the importance of Thebes, so the high priest of Amun commanded great power. He oversaw a large bureaucracy and a considerable amount of wealth. At the end of the New Kingdom (about 1550-1070 BC) the high priests effectively ran Upper Egypt, and some of them were even to use the title of king.

Roy was the high priest in the later part of the reign of Ramesses II (1279-1213 BC), and may have survived into the time of his successor Merenptah (1213-1203 BC). He commissioned several statues of himself. This block statue is one of four from the Temple of Mut at Karnak. Roy is shown presenting a large sistrum (rattle-like instrument), a symbol sacred to the goddess Hathor. The head of Roy is shown with a slightly oval face and elaborate shoulder-length wig, typical of the Ramesside period.

Roy was buried on the west bank of the Nile at Thebes in the area known as Dra Abul Naga, where there is a large and prominent group of tombs of Ramesside high priests; his tomb is given the number 283.

The statue was discovered by Napoleon's expedition to Egypt, and came to the British Museum after the Treaty of Alexandria. 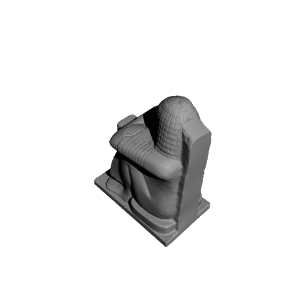 ×
0 collections where you can find Red Granite Figure of Roy at The British Museum, London by Scan The World