3D
Scan The World
4,482 views 284 downloads
1 collection
Community Prints Add your picture
Be the first to share a picture of this printed object
0 comments

Once the Egyptian élite progressed from the practice of burying the dead in simple pits in the ground, it was not long before they developed the concept of a container for the body. Very early examples are made of wood or ceramic, but early in the Old Kingdom (about 2613-2160 BC), the idea of a container of hard stone, a sarcophagus, developed. This example is made of granite, one of the hardest stones available to the Egyptians, and is common from the Fourth Dynasty (about 2613-2494 BC) onwards.

The exterior of the sarcophagus is decorated with a panelling known as 'palace façade', so called because it was based on the mud-brick façade of the early Egyptian palace. At the ends of each long side is a small <href="ilink|,_blank|">false door, to enable the spirits to gain access to and from the body inside. The top is rounded, and there are remains of protrusions on the ends to enable the lid to be lifted.

This sarcophagus was first mentioned in the early 1840s when the German Egyptologist Karl Richard Lepsius (1810-84) said that it came from a shaft in his tomb number 28 at Giza, the precise location of which is unclear. It then disappeared into provate hands, only surfacing in 1990, when it was acquired by the British Museum. 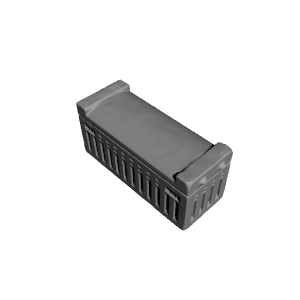 ×
1 collections where you can find Red Granite Sarcophagus at The British Museum, London by Scan The World