A relief depicting Olympia - Temple of Zeus. The massive temple of Zeus, is the largest temple in the Peloponnese, considered by many to be the perfect example of Doric architecture. It was built by the Eleans from the spoils of the Triphylian war and dedicated to Zeus. Construction began c. 470 and was completed before 456 BC. The architect was Libon of Elis; the sculptor of the pediments is unknown. Displayed at the Museum für Abgüsse Klassischer Bildwerke in Munich. It is a museum of classical paintings and sculpture. It shows sculptures of Greek and Roman antiquity from the 7th century BC to the 5th century AD. 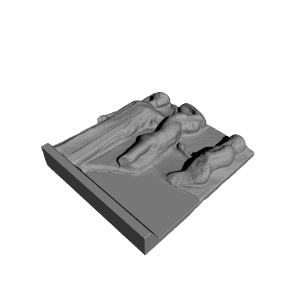