3D
Scan The World
2,515 views 119 downloads
Community Prints Add your picture
Be the first to share a picture of this printed object
0 comments

This relief is part of the font of Siena baptistery, a sculptural work of various artists, carried out between 1417 and 1430 . They worked, among others, Jacopo della Quercia , Donatello , Lorenzo Ghiberti and Giovanni di Turino , in a sculptural ensemble of great value, a fundamental step in the transition from Gothic sculpture to the Renaissance.

The decision to move the font from inside the Duomo in a new building was born at the end of the fourteenth century, when to expand the apse is made necessary the construction of spurs on the back, because of the steep gradient. This led to the creation of environments below the Cathedral, where it was decided to create a baptistery.

The construction of the true source and just took off in 1417 , under the design of Jacopo della Quercia and execution of Pietro del Minella , Sebastian Corso and Nanni from Lucca . For the measurements he resorted to Sienese masters and also two renowned Florentine artists, Donatello and Ghiberti , who dealt with some bronze decorations shipped direct from Florence. A rich documentation traces the stages of decoration source, with continuous surveillance of the Cathedral Workers, their reminders to the artists and the search for stylistic unity, eventually obtained despite different hands.

The source is composed of a hexagonal shaped tub, on whose sides are placed golden bronze panels with Stories of the Baptist , spaced at the corners from the representations of Virtues in niches. A pillar in the middle holding a ciborium carved on five sides by reliefs of Prophets of Jacopo della Quercia (the sixth is the door made of gilded bronze and enamels with the Madonna and Child by Giovanni di Turino) and surmounted by four putti bronze (on a total of six planned) and the marble statue of San Giovanni Battista , as well Jacopo.

The Story of the Baptist should be read from the side facing the altar, proceeding to the right. This scene is the third one. 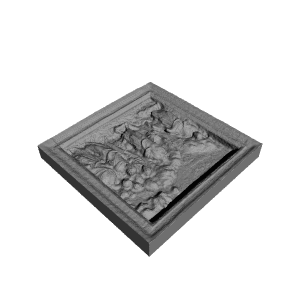 ×
0 collections where you can find Relief: Baptist Preaching- Siena Baptistery by Scan The World