Relief: Base of Judith and Holofernes

3D
Scan The World
3,602 views 95 downloads
Community Prints Add your picture
Be the first to share a picture of this printed object
0 comments

Relief: Base of Judith and Holofernes

This relief is a plaster copy of the original which is part of the bronze sculpture Judith and Holofernes (1457–64), created by Donatello at the end of his career.

It depicts the assassination of the Assyrian general Holofernes by Judith and is remarkable for being one of the first Renaissance sculptures to be conceived in the round, with its four distinct faces. Judith Beheading Holofernes, depicting the climax of the story in the biblical Book of Judithwas a common subject in art, and part of the Power of Women topos.

This statue, along with Donatello's David, were positioned together in front of the palace around 1457, when Cosimo de Medici's extended family decided to move into it. Although the exact place where these two were displayed is unknown, both of these statues became a symbol for the power Florence possessed. To facilitate the gilding the bronze was cast in 11 parts. The base of the sculpture resembles a cushion, a naturalistic device first used by Donatello for his St. Mark in the Orsanmichele. Intended to function as a fountain, this statue sits on a triangular pedestal with holes for water to flow through.

Judith is considered the symbol of liberty, virtue and victory of the weak over the strong in a just cause. She stands powerfully with a raised sword, holding the head of Holofernes by his hair. The statue was originally gilded; some gilding remains on the sword.

Christian symbolism of Judith reveals her actions over Holofernes to be a victory of virtue, particularly concerning self-control, chastity and humility, as opposed to promiscuity and pride. Her story in the Power of Women topos depicts the weak overcoming the assumed victor in an effort to protect her home. This is symbolic of the city of Florence, who fought to protect their Republic of Florence from foreign powers and to the Medici specifically upholding their pride in the city.

The anticipated slashing of the general's neck and overall notion of beheading is emphasized visually in the statue through Judith's intent gaze and strongly cocked arm wielding her blade ready to strike. In addition, carved into Holofernes' back, is a medallion structured to appear hanging from his neck has been historically known as a symbol of pride. Many scholars believe that in this instance the necklace is direct symbolism of pride evidenced by Psalms 73:6, which states, "the wicked wear pride like a necklace and violence wraps them round." It is also argued that the statue is meant to be viewed from the side rather than straight on. By viewing from an angle, the emphasis is on Holofernes' neck, flanked by both of Judith's legs underneath her garments, and is the center of attention as Judith pulls her arm back to strike. This would render the inscription "Behold the neck of pride served by the hand of humility" the most accurately depicted.

It is believed that an inscription on the granite pedestal originally read, "Kingdoms fall through luxury, cities rise through virtues. Behold the neck of pride severed by the hand of humility." This dramatic and detailed statue is thus a metaphor of the Medici rule, as the defenders of Florentine liberty, akin to Judith, slayer of the tyrant Holofernes and defender of the people. This view is supported by accounts that mention a second inscription on the pedestal which read, "The salvation of the state. Piero de' Medici son of Cosimo dedicated this statue of a woman both to liberty and to fortitude, whereby the citizens with unvanquished and constant heart might return to the republic." Inscribed on the cushion are the words OPVS . DONATELLI . FLOR (the work of the Florentine, Donatello), this being the only surviving signed work by the artist. 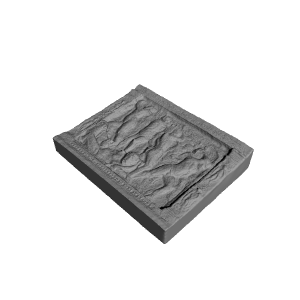 ×
0 collections where you can find Relief: Base of Judith and Holofernes by Scan The World