3D
Scan The World
1,530 views 68 downloads
Community Prints Add your picture
Be the first to share a picture of this printed object
0 comments

This is an ancient memorial relief dedicated to Hephaestion, (c. 356 BC – 324 BC), son of Amyntor, was an ancient Macedonian nobleman and a general in the army of Alexander the Great. He was "... by far the dearest of all the king's friends; he had been brought up with Alexander and shared all his secrets." This relationship lasted throughout their lives and was compared, by others as well as themselves, to that of Achilles and Patroclus.

His military career was distinguished. A member of Alexander the Great’s personal bodyguard, he went on to command the Companion cavalry and was entrusted with many other tasks throughout Alexander's ten-year campaign in Asia, including diplomatic missions, the bridging of major rivers, sieges and the foundation of new settlements. Besides being a soldier, engineer and diplomat he corresponded with the philosophers Aristotle and Xenocrates and actively supported Alexander in his attempts to integrate the Greeks and Persians. Alexander formally made him his second-in-command when he appointed him Chiliarch of the empire. Alexander also made him part of the royal family when he gave him as his bride Drypetis, sister to his own second wife Stateira, both daughters of Darius III of Persia. When he died suddenly at Ecbatana around age thirty-two, Alexander was overwhelmed with grief. He petitioned the oracle at Siwa to grant Hephaestion divine status and thus Hephaestion was honoured as a Divine Hero. Hephaestion was cremated and his ashes taken to Babylon. At the time of his own death a mere eight months later, Alexander was still planning lasting monuments to Hephaestion's memory. 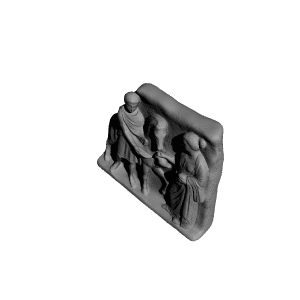