3D
Scan The World
4,214 views 361 downloads
5 collections
Community Prints Add your picture
Be the first to share a picture of this printed object
0 comments

In 1531, the Guild house of the Free Sailors was built on the Graslei in Ghent. The house was designed by Christoffel van den Berghe.

Above the door a sculpture is placed instead of the traditional transom. The caravel refers to the profession. This casting was made in 1895, a few years before the restoration of the facade.

A caravel is a small, highly maneuverable sailing ship developed in the 15th century by the Portuguese to explore along the West African coast and into the Atlantic Ocean. The lateen sails gave it speed and the capacity for sailing windward (beating). Caravels were used by the Portuguese for the oceanic exploration voyages during the 15th and 16th centuries in the Age of Discovery. Prince Henry, Christopher Columbus, and Bartolomeu Dias all used a caravel. 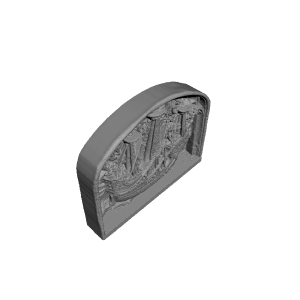