3D
360°
Scan The World
1,651 views 75 downloads
Community Prints Add your picture
Be the first to share a picture of this printed object
0 comments

This marble relief depicts the scene in which Andromeda as rescued by Perseus, identifyable through the corpse of the sea-monster Cetus crumpled beneath Andromeda and Perseus holding the decapitated head of Medusa.

In Greek mythology Andromeda, the daughter of king Cepheus, is punished to death by Poseidon after her father boasts that she is more beautiful than the Nereids. Chained to a rock and left to die by the sea-monster, Perseus saves her through killing it with the decapitated head of Medusa.

A famous Roman fresco from Pompeii (see attached image in thumbnail) depicts a similar part of the narrative as seen in this relief. 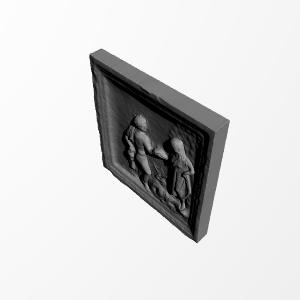