3D
Scan The World
2,479 views 82 downloads
Community Prints Add your picture
Be the first to share a picture of this printed object
0 comments

Apollo is depicted with archaisic bulging curly hairstyle, to the right the upper part of his bow is visible. Apollo is one of the most important and complex of the Olympian deities in classical Greek and Roman religion and Greek and Roman mythology. The ideal of the kouros (a beardless, athletic youth), Apollo has been variously recognized as a god of music, truth and prophecy, healing, the sun and light, plague, poetry, and more. Apollo is the son of Zeus and Leto, and has a twin sister, the chaste huntress Artemis. Apollo is known in Greek-influenced Etruscan mythology as Apulu. From the Temple of Sarapis, decoration of the ceiling of the porch. This temple was built in the 3rd century BCE near the south agora of Miletus and also it was restored by Emperor Julius Aurelius (270-75 CE). 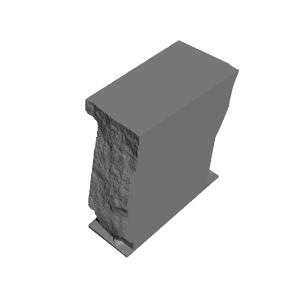 ×
0 collections where you can find Relief: Fragment of a Coffered Ceiling Slab by CEG