Relief of a Murmillo Gladiator at The State Hermitage Museum, St Petersburg

3D
Support Free Scan The World
2,000 views 57 downloads
Community Prints Add your picture
Be the first to share a picture of this printed object
0 comments

Relief of a Murmillo Gladiator at The State Hermitage Museum, St Petersburg

The murmillo was a type of gladiator during the Roman Imperial age. The murmillo-class gladiator was adopted in the early Imperial period to replace the earlier Gallus, named after the warriors of Gaul. As the Gauls inhabiting Italy had become well-integrated with the Romans by the time of the reign of Augustus, it became undesirable to portray them as enemy outsiders; the Gallus-class gladiator thus had to be retired.

This tombstone relief depicts a Murmillo Gladiator, which can be identified by the distinctive helmets decorated with an image of a fish. There are Greek verses engraved around the subject, perhaps to commemorate the death of a gladiator.

There is no support material. Happy printing Enjoy! 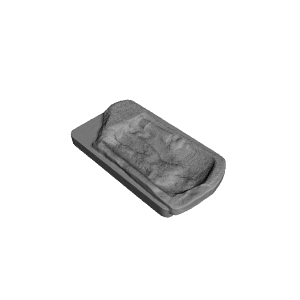 ×
0 collections where you can find Relief of a Murmillo Gladiator at The State Hermitage Museum, St Petersburg by Scan The World