3D
Support Free Scan The World
2,941 views 138 downloads
2 collections
Community Prints Add your picture
Be the first to share a picture of this printed object
0 comments

This bronze repousse relief was probably originally from a mirror cover, depicting the goddess Nike sacrificing a bull. Bulls were common sacrificial animals in ancient Greece. Here, the sacrifice of a bull by Nike, the personification of Victory, may refer to a victory gained in an athletic contest or in battle.

The scene also decorated the Temple of Athena Nike at Athens. 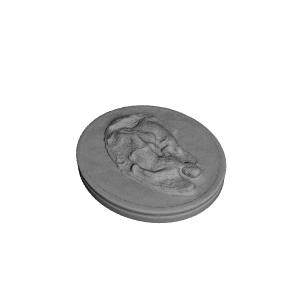 ×
2 collections where you can find Relief of Nike sacrificing a bull at The British Museum, London by Scan The World