3D
Scan The World
1,262 views 59 downloads
Community Prints Add your picture
Be the first to share a picture of this printed object
0 comments

The image of the enthroned Virgin supporting the infant Christ was central to Christian art. It can, however, be traced back to ancient times, to Roman and Egyptian depictions of goddesses, empresses and ordinary mortals. This example was formerly positioned on the staircase between the cathedral and the episcopal palace in Cremona in northern Italy.

Some gestures in medieval art were used to communicate specific meanings. Here the infant Christ raises his right hand. The index and middle fingers are extended, while the remaining fingers and thumb are held against the palm. This was a gesture of blessing, conferring the favour of God on the viewer. 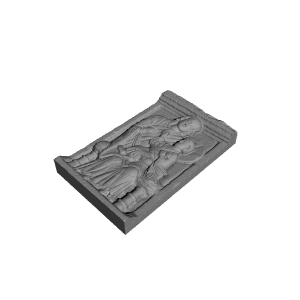