3D
Scan The World
3,063 views 158 downloads
3 collections
Community Prints Add your picture
Be the first to share a picture of this printed object
0 comments

This magnificent relief represents the deity of the Earth, Tlaltecuhtli, in its feminine version. It was found in 1981, during the excavations of the Templo Mayor Project.
Even though it was mutilated as a consequence of the Spanish conquest, its beauty and main characteristics can be appreciated: the goddess has her back towards the front, with her head turned over and upside down, and she is in the natural squatting childbirth position. She has curly hair on her head, lipless mouth and a skull tied to her waist; in the joints (elbows and knees) she has faces shaped as claws, similar to the one on the knife coming out of her mouth. 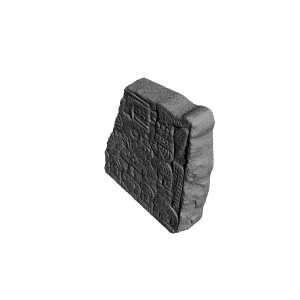