3D
Scan The World
2,059 views 54 downloads
1 collection
Community Prints Add your picture
Be the first to share a picture of this printed object
0 comments

An orthostat is a large stone with a more or less slab-like shape that has been artificially set upright (so a cube-shaped block is not an orthostat). Menhirs and other standing stones are technically orthostats although the term is used by archaeologists only to describe individual prehistoric stones that constitute part of larger structures. Common examples include the walls of chamber tombs and other megalithic monuments and the vertical elements of the trilithons at Stonehenge. Especially later, orthostats may be carved with decoration in relief, a common feature of Hittite architecture and Assyrian sculpture among other styles. In the latter case, orthostats are large thin slabs of gypsum neatly and carefully formed, for use as a wall-facing secured by metal fixings and carrying reliefs, which were then painted. 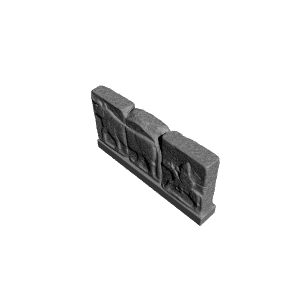