3D
Scan The World
1,309 views 45 downloads
Community Prints Add your picture
Be the first to share a picture of this printed object
0 comments

This plaque was found in the west of Athens, near the Dipylon.

This is the top of a public memorial of fallen warriors. The preserved part of the relief depicts a foot hoplite and a rider attacking a naked opponent, who kneels on the ground holding his shield.

The image originally continued on the left, possibly with another pair of fighting warriors. According to the inscription below the relief, its theme is inspired by the battles of the Athenians in Corinth and Boeotia.

The beginning of a list of the fallen Athenian warriors arranged according to tribes appears in smaller letters below the relief. 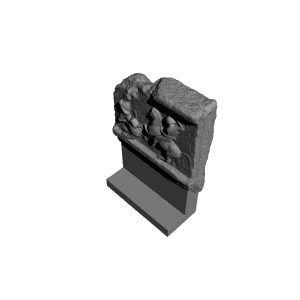