3D
Scan The World
4,665 views 416 downloads
Community Prints Add your picture
Be the first to share a picture of this printed object
0 comments

Mithra is the Zoroastrian angelic Divinity (yazata) of Covenant and Oath. In addition to being the Divinity of Contracts, Mithra is also a judicial figure, an all-seeing Protector of Truth, and the Guardian of Cattle, the Harvest and of The Waters.

The Romans attributed their Mithraic Mysteries (the Mystery Religion known as Mithraism) to Persian or Zoroastrian sources relating to Mithra. However, since the early 1970s, the dominant scholarship has noted dissimilarities, and those Mysteries are now qualified as a distinct Roman product.

In the Zoroastrian calendar, the sixteenth day of the month and the seventh month of the year are dedicated to, and under the protection of, Mithra. (The Iranian civil calendar of 1925 adopted Zoroastrian month-names, and as such also has the seventh month of the year named 'Mihr'). The position of the sixteenth day and seventh month reflects Mithra's rank in the hierarchy of the Divinities; the sixteenth day and seventh month are respectively the first day of the second half of the month and the first month of the second half of the year. The day on which the day-name and month-name dedications intersect is (like all other such intersections) dedicated to the divinity of that day/month, and is celebrated with a Jashan (from AvestanYasna, "Worship") in honor of that Divinity. In the case of Mithra, this was Jashan-e Mihragan, or just Mihragan in short.

While Mithra is not the Divinity of the Sun in Zoroastrian scripture (or in Indian scripture either), this being the role of Hvare.khshaeta (literally "Radiant Sun", whence also Middle Persian Khorshed for the Sun), in Zoroastrian/Iranian tradition, Mithra became the Divinity of the Sun. How, when or why this occurred is uncertain, but it is commonly attributed to a conflation with the Babylonian Shamash, who – in addition to being a Sun God – was a judicial figure like Mithra. In the Hellenistic era (i.e., in Seleucid and Parthian times), Mithra also seems to have been conflated with Apollo, who – like Mithra – is an all-seeing Divinity of the Truth. 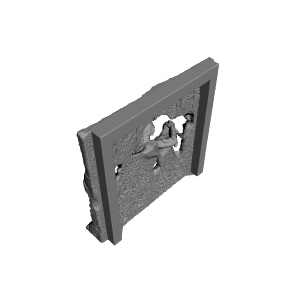 ×
0 collections where you can find Relief representing Mithra at The Louvre, Lens by Scan The World