Relief slab figuring the contest between Apollo and Marsyas

3D
Scan The World
1,163 views 43 downloads
1 collection
Community Prints Add your picture
Be the first to share a picture of this printed object
0 comments

Relief slab figuring the contest between Apollo and Marsyas

This slab was found at Mantineia, Arkadin. Together with 3 other slabs, it formed the revetment of a pedestal for the stature of the Delian trinity (Leto, Apollon and Artemis), or of an altar.

On this slab is depicted the music contest between Apollon and Marsyas. Apollon sits on a rock holding a kithara, and Marsyas stands on the right playing the flute. Between them stands the Scythian who will punish the insolent Marsyas, after his defeat, with a horrible death. 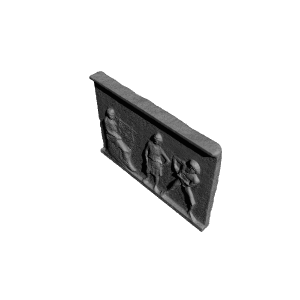