3D
Scan The World
1,703 views 65 downloads
Community Prints Add your picture
Be the first to share a picture of this printed object
0 comments

Thomas Stirling Lee was originally commissioned to design 28 panels around the base of the hall, but less than half were completed, and not all by Lee himself. Problems started with the first panel, one of a projected series of six showing "The Attributes and Results of Justice": it caused a furore, because "the child Justice" was nude — as was "the girl Justice" in the next panel. Lee was eventually allowed to continue that series, which is to the left of the central portico, and also designed two in a different series to the right of the portico, of which this representation of shipwrights is an example. These panels tell "The Story of Liverpool," in which ship-building obviously played a major part. Other panels in the series were designed by Charles James Allen and Conrad Dressler. Benedict Read comments on these New Sculpture works, "The field of architectural sculpture was something the movement's apologist, then and now, consider it made particularly its own". 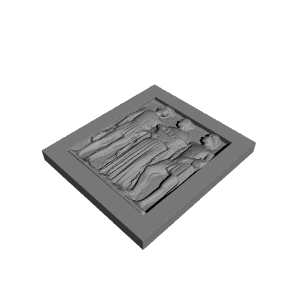 ×
0 collections where you can find Relief: St George's Hall by Scan The World