3D
Scan The World
1,888 views 113 downloads
Community Prints Add your picture
Be the first to share a picture of this printed object
0 comments

This relief depicts Goddess Maheshwar, the wife of Lord Shiva. She is also the presiding deity of Dumal community of Western Orissa.
There was a powerful demon called Durgam, who had acquired all the four Vedas from Lord Brahma after pleasing him. In fact, Lord Brahma had given a boon that no one will be able to defeat him during wars. Durgam became very powerful and started harassing kings and sanyasis. As a result of this dharma, it did not rain for one hundred years. Therefore, there was drought and people were starving. The deities went to goddess Maheshwari (Parvati) and narrated about the incidents. Goddess Maheshwari was very much moved by the pathetic stories and started crying for nine days and nights. The tear started flowing in the form of a river and the drought came to an end. 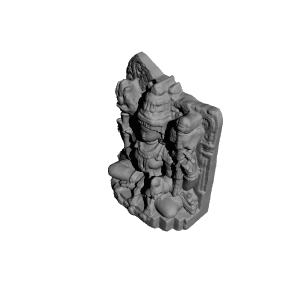