Relief with the fainting Virgin

3D
Scan The World
1,190 views 51 downloads
Community Prints Add your picture
Be the first to share a picture of this printed object
0 comments

Relief with the fainting Virgin

Northern Netherlandish, probably Utrecht, carved relief depicting fainting Virgin. This scene was popular in later medieval art and theological literature, but as it was not mentioned in the Canonical Gospels, it became controversial, and from the 16th century was discouraged by many senior churchmen. The idea was developed in the late Middle Ages, that the Virgin Mary had fainted during the Passion of Christ, most often placed while she watched the Crucifixion of Jesus. It was based on mentions in later texts of the apocryphal gospel the Acta Pilati, which describe Mary swooning. 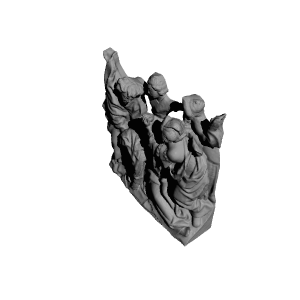