3D
Scan The World
4,131 views 274 downloads
3 collections
Community Prints Add your picture
Be the first to share a picture of this printed object
0 comments

A reliquary is a container for keeping holy relics safe. Relics, the physical remains of saints or of items associated with them, are venerated in the Christian tradition. The triangular-sectioned lid here is removable, allowing access to the relics. This reliquary is supposed to have held the relics of St Boniface (born about 675, died about 755). He was an English saint and martyr who preached the Gospel to the heathen tribes of Germany and the Low Countries. This reliquary is in the form of a house-shaped shrine. It depicts 16 scenes from the Passion of Christ. Various animals, scrolls, prophets, angels and saints decorate the carved reliefs. Originally the reliquary had pinnacles at each corner and a cresting. Given its age, it is remarkable that most of the original gilding survives.

This reliquary is said to come from the church of the Franciscans at Constance. This is a very ancient town with a long ecclesiastical history, situated on the river Rhine in southern Germany. The carvings are similar to others that survive in the town. Several of them derive from engravings by Martin Schongauer (born about 1435-1450, died 1491), which he published between about 1470 and 1490. 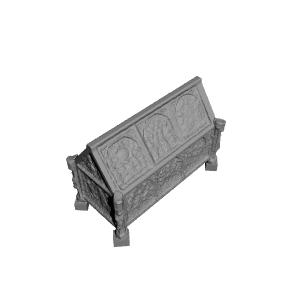 ×
3 collections where you can find Reliquary Shrine by vam