3D
360°
Scan The World
1,457 views 49 downloads
Community Prints Add your picture
Be the first to share a picture of this printed object
0 comments

We may not know exactly what Nofer looked like, but we can be sure that he had a large aquiline nose. This aspect is featured prominently on the north doorjamb from his chapel as well as on the reserve head found at the bottom of the tomb’s shaft. The scale with which Nofer is represented on the walls - three times bigger than other figures - and the fourteen different offices enumerated there demonstrate that he was a prominent official in Dynasty 4. Among his titles, both real and honorary, were overseer of the treasury, overseer of the king’s regalia, overseer of the arsenal, secretary of all the secrets of the king, estate manager, and royal scribe.

While Nofer’s relief is idealized, his reserve head offers a much more portraitlike representation of how he must have looked, with a somewhat elongated face, high cheekbones, and a square chin, in addition to his prominent nose. The rough cutting of the nose, ears, and hairline suggest that in this case, finer detailing might have been executed in plaster. Alternatively, it may represent intentional damage inflicted for reasons that remain unknown.

George Reisner was not the first to enter Nofer’s tomb in modern times when he excavated it in 1905. August Mariette, the first director of antiquities, found the tomb in 1857, and in the following year he presented the other (southern) doorjamb of the tomb chapel to the viceroy of Egypt, who, in turn, presented it to Prince Napoleon of France. From there it entered another French collection before it was purchased by the Louvre in 1868. Other relief-decorated blocks were plundered from the tomb prior to the MFA excavations and are currently in Rome, Copenhagen, and Birmingham (England).

Reserve heads (also known as 'Magical Heads' or 'Replacement Heads') are distinctive sculptures made primarily of fine limestone that have been found in a number of non-royal tombs of the Fourth Dynasty of Egypt; particularly from the reigns of pyramid-building pharaohs Khufu to Khafre. Whilse each of the heads share characteristics in common with each other, the striking individuality of the pieces make them some of the earliest examples of portrait sculpture in existence. Their purpose is not entirely clear, but it is suggested that the head was made to serve as an alternate home for the spirit of the dead owner should anythingh happen to its body. 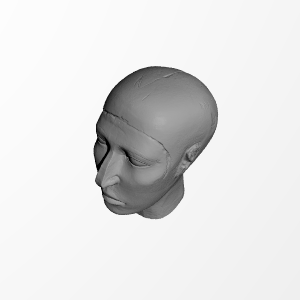