3D
Scan The World
4,904 views 1,344 downloads
16 collections
Community Prints Add your picture
Be the first to share a picture of this printed object
0 comments

The Caprone appears with his front legs outstretched, the head slightly pointing to the left and the curly mantle with locks intricately falling on its face. This majestic and extremely well-executed goat has been attributed to the hand of Bernini thanks to the attentive research conducted by 600’s restorers.
The sculpture was built during the Imperial age, it was probably thought of as a decoration of an important Roman palace. The imponent statue was bought by the collector Marchese Vincenzo Giustiniani who in the end decided to exhibit the piece at the famous Gallery of Palazzo Giustiniani. The pieces of that gallery were soon incorporated with the Torlonia collection becoming one big collection.
The fact that it became part of Giustiniani collection, provides strong evidence that this might have been sculpted by Bernini. Gian Lorenzo Bernini would in fact often restore and work with marble artworks hosted in the gallery.

This sculpture has been scanned thanks to our generous backers that unlocked the "Torlonia Marbles" during our crowdfunding campaign. 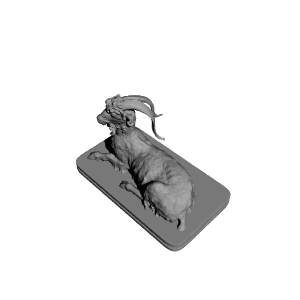