Asclepius and Hippolytus at The Boboli Gardens, Italy

3D
Scan The World
2,587 views 149 downloads
Community Prints Add your picture
Be the first to share a picture of this printed object
0 comments

Asclepius and Hippolytus at The Boboli Gardens, Italy

This slightly larger than life-size group marble sculpture was realised by Giovanni Battista Caccini (24th October 1556 - 13th March 1613). The piece depicts the brief story between Asclepius and Hippolytus. The Greek Hippolytus was a son of Theseus and either Antiope or Hippolyte and was identified with the Roman forest god Virbius. The most common legend regarding Hippolytus states that he was killed after rejecting the advances of Phaedra, his stepmother. Spurned, Phaedra deceived Theseus saying that his son had raped her. Theseus, furious, used one of the three wishes given to him by Poseidon to curse Hippolytus. Poseidon sent a sea-monster to terrorize Hippolytus's horses, who dragged their rider to his death.

After his death it was realised by Hippolytus's cult that Asclepius, the Greek god of medicine, was asked to resurrect the young man by Artemis after he had vowed chastity to her. After doing this, Zeus killed Asclepius with a thunderbolt because after bringing people back from the dead, Hades thought that no more dead spirits would come to him in the underworld, so he asked his brother Zeus to stop him. This event angered Apollo who in turn killed the Cyclopes who made the thunderbolts for Zeus. For this act Zeus suspended Apollo from the night sky and commanded Apollo to serve Admetus, the King of Thessali, for a year. 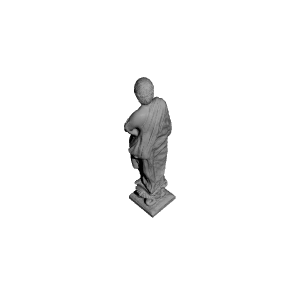 ×
0 collections where you can find Asclepius and Hippolytus at The Boboli Gardens, Italy by Scan The World