Jacquemart exhibited at the Paris Salon from 1847–1879, receiving medals in 1857, 1863 and 1865. He traveled in Egypt and Turkey, and was commissioned by the city of Alexandria, Egypt, to create a colossal statue of Muhammad Ali of Egypt.

He sculpted in large, medium and small scale. Many of his works were cast in bronze by theVal d' Osne foundry and some by the silversmith Christofle. Ultimately, however, he earned his reputation for his many larger animal works. In 1870 Jacquemart became a Chevalier of the Légion d'honneur. 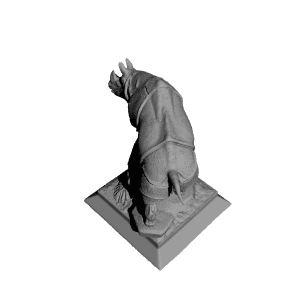 ×
14 collections where you can find Rhinoceros at the Museum d'Orsay, Paris by Scan The World
×
Peter Song
@PeterSong
0
Printed on: Zortrax M200
Material: ABS
Posted at: 19th July 2016