3D
Scan The World
2,488 views 58 downloads
Community Prints Add your picture
Be the first to share a picture of this printed object
0 comments

A collector and arbiter of taste, Richard Payne Knight (1750-1824) was known for this antiquarian interests and writings on aesthetics. He gained notoriety with his 'Disclosure of the Worship of Priapus' (1786) which, as it discussed sexual symbolism in ancient societies, was attacked as immoral. He also wrote on architecture and garden design; his didactic poem 'The Landscape' (1794) contributed to the theoretical debate on the Picturesque. It is a sculpture made of marble and bronze, a characteristic familiar with John Bacon the Younger (1777-1859). The bust is signed and dated in 1814. 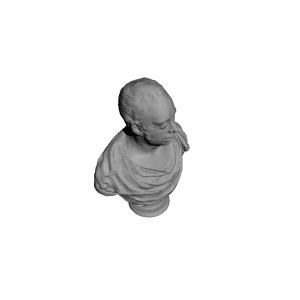 ×
0 collections where you can find Richard Payne Knight at The National Portrait Gallery, London by Scan The World