3D
4,504 views 198 downloads
2 collections
Community Prints Add your picture
Be the first to share a picture of this printed object
0 comments

The penultimate character(ninth) in the Road To 2020: HNV lineup is King K Rool from the Donkey Kong franchise! The cunning crocodile debuted with his Kremling crew in 1994, where he stole Donkey Kong's bananas. Ignored for a while, he has made a comeback with his introduction as a fighter in Super Smash Bros. Ultimate.

For the design, I was aiming to recreate one-for-one the concept art of the first game. The scaliness was difficult to emulate, and the cape is a bit thick, but it's all for better printability. Have fun with this one. :D 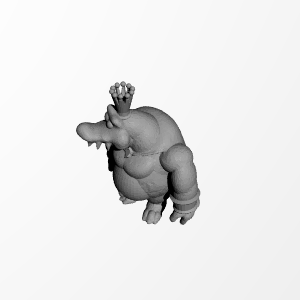 ×
2 collections where you can find Road to 2020: King K Rool by Hillbilly 'Mac