3D
Scan The World
2,893 views 74 downloads
Community Prints Add your picture
Be the first to share a picture of this printed object
0 comments

This bronze bust, dropping above the shoulders depicts Robert Sainsbury. It was sculpted by Jacob Epstein in his characteristic, choppy style. What is interesting about this sculpture is Sainsbury's facial expression, which rests as a slight smug. Sainsbury was a businessman and was very charming in nature. The museum in which this sculpture is held in permanent display was founded by himself and his wife, Lisa Sainsbury. From Wikipedia; Sir Robert James Sainsbury (24 October 1906 – 2 April 2000), was the son of John Benjamin Sainsbury (the eldest son of Sainsbury's supermarkets founder John James Sainsbury), and along with his wife Lisa began the collection of modern and tribal art housed at the Sainsbury Centre for Visual Arts in Norwich. 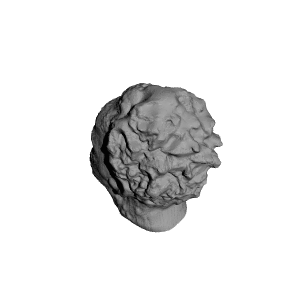 ×
0 collections where you can find Robert Sainsbury at UEA, Norwich by Scan The World