3D
Scan The World
2,696 views 76 downloads
1 collection
Community Prints Add your picture
Be the first to share a picture of this printed object
0 comments

This marble bust was made in 1822 by Sir Francis Leggatt Chantrey (1781-1841). The sculpture depicts Robert Stewart, the second Marquess of Londonderry (who also goes by the name of Lord Castlereagh). Castlereagh was Chief Secretary for Ireland (1789-1801) and Leader of the House of Commons (1812-21). As Foreign Secretary from 1812-22 he is famous for his part in the Congress of Vienna (1814-15). This bust is one of a number of copies of an original which Castlereagh commissioned in 1820. Said to be a good likeness, Chantrey juxtaposed the nudity of classical sculpture with a natural 'conversational' pose to produce an example of the 'English' sculpture for which he was renowned. 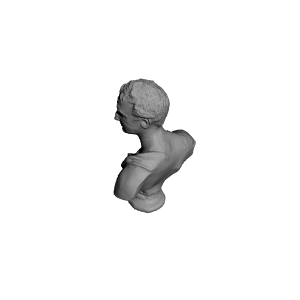 ×
1 collections where you can find Robert Stewart at The National Portrait Gallery, London by Scan The World