This object was made in Tinkercad. https://www.tinkercad.com/things/9SsmE4Tu1LO

Róbértó. He was a breathtaking sight with his classy watch, outstanding facial features and an impeccable attitude. Róbértó was a very nice fellow who lived in Wahland! The place is of peace, and imagination! Wahland was elegant. It's where all the rejects in the world didn't have to feel rejected anymore. Róbértó lived among other undiscovered creatures such as himself. Róbértó was there because of his one eye. He wasn't good enough for his own kind. He was supposed to be Phaltraphien, which was a type of monster that lived on earth, secretly among humans. Róbértó was banned because of his one-eye. His own family left him on the streets. Now he has made his own species, One-eye Róbértós. They live in Wahland. What defines One-eyed Róbértós? It’s their magnificent one eye, and short stubby arms, and the mohawk. What makes Roberto any different from other Róbértós? He is the leader of all Róbértós with his fancy little watch! 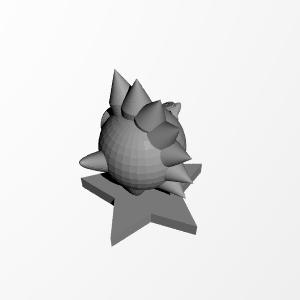 ×
0 collections where you can find Roberto monster by Val1