3D
Scan The World
2,903 views 116 downloads
1 collection
Community Prints Add your picture
Be the first to share a picture of this printed object
0 comments

He was married to Maria De Buysscher and was the son of René De Nijs Vidts and Joséphine. He was the last child of six, after his siblings Norbert, Hermine, Hélouise, Marie and Palmyre. The Vidts were ships of St. Nicholas in the period 1932-1940 and 1944-1946. In 1944, during the Second World War , he was arrested by the Germans, but he escaped and lived in hiding until the liberation. He was mayor of Saint Nicholas from 1947 to 1962. He was in 1948 with the support of businessman Andre Sax firstPeace Celebrations , commemorating the liberation of Sint-Niklaas, organize.  In 1949 he was the driving force behind expropriation of the castle Walburg and its domain, which in 1952 as city park would be drawn to the public and that since 1987 to him Romain De Vidtspark is mentioned. His son Paul later became mayor of Sint-Niklaas.

This bronze lifesize bust was sculpted by Werner Heyndrickx. 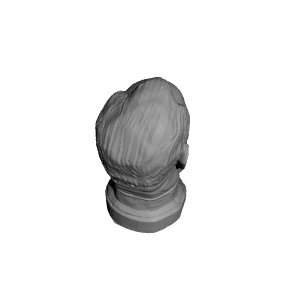 ×
1 collections where you can find Romain De Vidts in Oost-Vlaanderen, Belgium by Scan The World