3D
Scan The World
2,010 views 142 downloads
Community Prints Add your picture
Be the first to share a picture of this printed object
0 comments

ASKLEPIOS (Asclepius) was the god of medicine. He was also the patron god, and reputed ancestor, of the Asklepiades (Asclepiades), the ancient guild of doctors.

Asklepios was the son of Apollon and the Trikkaian (Triccaean) princess Koronis (Coronis). His mother died in labour and when she was laid out on the pyre, Apollon cut the unborn child from her womb. From this Asklepios received his name which means "to cut open." Asklepios was raised by the centaur Kheiron (Chiron) who instructed him in the art of medicine. He grew so skilled in the craft that he was able to restore the dead to life. This was a crime against the natural order and so Zeus destroyed him with a thunderbolt.

After his death Asklepios was placed amongst the stars as the constellation Ophiochus ("the Serpent Holder"). Some say his mother was also set in the heavens as Corvus, the crow (korônê in Greek). Asklepios' apotheosis into godhood occurred at the same time. He was sometimes identified with Homer's Paion (Paeon), the physician of the gods.

Asklepios was depicted as a kindly, bearded man holding a serpent-entwined staff. Although he is largely absent from ancient Greek vase painting, statues of the god are quite common.

Tried printing on both standard settings and slow print settings. Overall quality is better on slow speeds, but the arm didn't print properly on either setting. 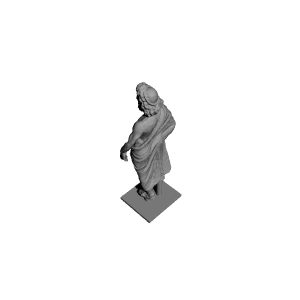