3D
Scan The World
3,093 views 164 downloads
Community Prints Add your picture
Be the first to share a picture of this printed object
0 comments

On the front and the two short sides are two pairs of winged griffins, seated in profile and with one front paw resting on a candelabrum. At the centre of the composition is a large wine cup placed on top of an acanthus bush. Its modest size suggests that this sarcophagus was used for the burial of a young person . The winged griffin motif, associated with the cult of Apollo and Dionysus, offen appears on ancient funerary monuments and especially on the short sids of sarcophagi of the 2nd and 3rd c. AD as a symbol of aportheosis and victory over death. The repetition of the same iconographical motif on the front and sides make this sculpture particularly interesting and dates it to the first half of the 2nd c. AD. 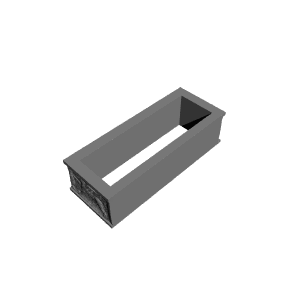