3D
Scan The World
2,341 views 64 downloads
Community Prints Add your picture
Be the first to share a picture of this printed object
0 comments

Romul Ladea, known as Rum Ladea (1901 - 1970) was a Romanian sculptor and professor. After his education Ladea moved to Paris where he took part in numerous exhibitions and workshops across the city. In 1924 he enrolled at the Julien Academy and worked full time in the studio of Constantin Brancusi. His work is profoundly realistic, with clear expression in the faces of his subjects and having influences from Brancusi, Rodin and Michelangelo. He soon became the fe facto founder of Romanian modern sculpture and excerted a significant influence on Romanian art (stern, strong portraits became the norm in the latter half of the 20th Century).

At his first solo exhibition Ladea he spoke about his work; "In reality, there was only one way I started my artistic apprenticeship and continued to follow it for all of my life. In one way it was to carefully study and remember folk art, all whilst continuing to understand and penetrate to its deepest spiritual meanings characteristic to human life". 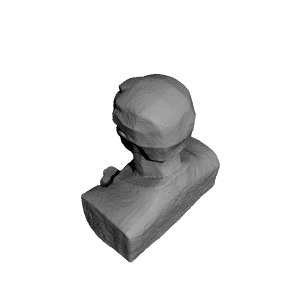