3D
Scan The World
1,934 views 67 downloads
Community Prints Add your picture
Be the first to share a picture of this printed object
0 comments

The collections of the Accademia di San Luca are non-homogeneous nature of type and origin of the works that compose them. These are pieces of great historical and artistic interest, dating from the fifteenth and twentieth century. The largest group, however, mostly dating from the seventeenth and eighteenth century. Academic collections consist of more than a thousand paintings and three hundred sculptures, from about five thousand five hundred drawings and a collection of prints and medals. The number of works held today in Palazzo Carpegna does not include, however, all the pieces that over the centuries have come to be part of the academic heritage which over the years has been partially lost or otherwise dispersed.
The heterogeneous nature of the Academy collections is mainly due to the fact that they are constituted through time not according to a predetermined design, but with gifts or donations of academic or private collectors, with works from competitions Academy od used for educational purposes, and with a group of pictures coming from the Pinacoteca Capitolina.
Starting from the oldest statutes of the Society, in fact, it is prescribed that each academic at the time of appointment left as a gift in academic collections an essay of his art ( "pièce de réception", entrance gift). He was then requested each academic year to send a gift own portrait. It created, then, in this way, since the seventeenth century, a gallery who took more concrete form in the course of the eighteenth century.
Among the most important works housed in academic collections you may recall, for example, a detached fresco representing a cherub, attributed to Raphael, to whom the painting of St. Luke painting the Madonna is also traditionally assigned; The Annunciation to the Shepherds Jacopo Bassano; the Virgin and angels of Van Dyck; Nymphs crowning the Rubens Bountiful; Judith and Holofernes Piazzetta; the self-portrait of Federico Zuccari; the portrait of Pietro Bernini attributed to his son Gian Lorenzo; the Algardi sculptures, arms, Le Gros.
The collections of the Accademia di San Luca are exposed, in part, in the gallery, on the third floor of its current location in Carpegna palace and, in part, in academic halls, the offices of the secretariat, in the conference room, located on the floor noble, in Sarti Library and in the historical archives that are located on the second floor. The rest of the works is placed in the deposits located in some spaces on the ground floor and in the spaces along the helical ramp. 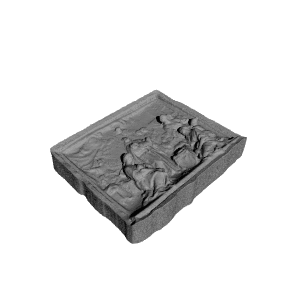 ×
0 collections where you can find S. Felice resuscitating a newborn by Scan The World