3D
1,531 views 35 downloads
Community Prints Add your picture
Be the first to share a picture of this printed object
0 comments

So, rather than rehash the whole ordeal, you can check out loubie's well-worded post here.

Basically, some less-than-respectable individuals have loaded a ton of our (Thingiversers) designs (along with pictures directly from our posts) onto eBay where they are charging... let's just say an exorbitant amount of money... for printing said designs and not giving so much as a nod to the artists that created them. Now, normally I don't care too much how my designs are used, but seeing as these "just3dprint" guys were total jerks to some good people when confronted about their blatant violations, I'd like to go ahead and throw my hat in the ring.

So without further ado, I introduce Sad Tofu as a show of support for loubie, cerberus333, and all the others who have had their hard work and creativity insulted by opportunistic garbage-people (sorry, but you are) with deranged senses of entitlement.

Also, in regard to the designs that were stolen from us (Ill Gotten Games), we're happy to announce that we're selling 3D printed versions of our TofuDogs, Barkfellow, Arfwood, and Furlong on eBay as well! So, you can either buy one from us for $5, or you could buy one from just3dprint for the low, low price of $83!! Gotta love the free market. Hey, but who knows, maybe their version is 12' tall and filled with exotic candy. They don't explicitly SAY it isn't. 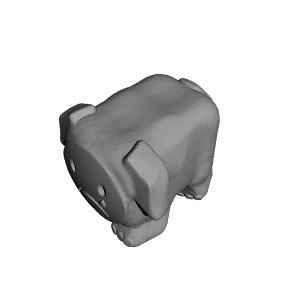 ×
0 collections where you can find Sad Tofu! IMPORTANT NOTICE! by dutchmogul