This image of Saint Anthony of Padua with the Christ Child on a book was carved in the kingdom of Kongo, which had adopted Christianity toward the end of the fifteenth century, shortly after the arrival of the Portuguese. A specifically Kongolese Catholicism evolved.

Anthony is depicted as a young monk in accordance with European tradition. The child, however, holds a fly whisk, a Kongolese emblem of power. Such images could also be used as power figures. In this case, the otherworldly force is present in them, and these figures were not simple representations, like that of Saint Christopher. 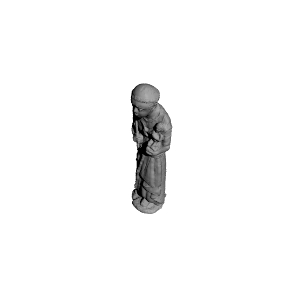 ×
0 collections where you can find Saint Anthony by CEG