3D
Scan The World
1,627 views 68 downloads
Community Prints Add your picture
Be the first to share a picture of this printed object
0 comments

This image of Saint Anthony of Padua with the Christ Child on a book was carved in the kingdom of Kongo, which had adopted Christianity toward the end of the fifteenth century, shortly after the arrival of the Portuguese. Anthony is depicted here as a young monk in accordance with European tradition, but the child holds a fly whisk, a Kongolese emblem of power. Similar imagery could also have been used as power figures. 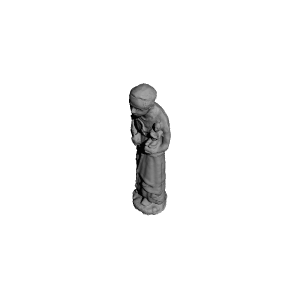