3D
360°
Scan The World
1,275 views 81 downloads
1 collection
Community Prints Add your picture
Be the first to share a picture of this printed object
0 comments

This image of Saint Anthony of Padua with the Christ Child on a book was carved in the kingdom of Kongo, which had adopted Christianity toward the end of the fifteenth century, shortly after the arrival of the Portuguese. A specifically Kongolese Catholicism evolved. Anthony is depicted as a young monk in accordance with European tradition. The child, however, holds a fly whisk, a Kongolese emblem of power. Such images could also be used as power figures. In this case, the other-worldly force is present in them, and these figures were not simple representations, like that of Saint Christopher. 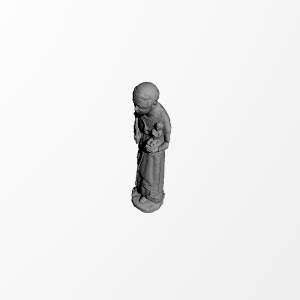 ×
1 collections where you can find Saint Anthony by CEG