Saint Antoine at The Louvre, Paris

3D
Scan The World
2,839 views 140 downloads
Community Prints Add your picture
Be the first to share a picture of this printed object
0 comments

Saint Antoine at The Louvre, Paris

Saint Anthony or Antony was a Christian monk from Egypt, revered since his death as a saint. He is distinguished from other saints named Anthony by various epithets: Anthony the Great, Anthony of Egypt, Anthony the Abbot, Anthony of the Desert,Anthony the Anchorite, and Anthony of Thebes. For his importance among the Desert Fathers and to all later monasticism, he is also known as the Father of All Monks. His feast day is celebrated on January 17 among the Orthodox and Catholic churches and on Tobi 22 in the Egyptian calendar used by the Coptic Church.

The biography of Anthony's life by Athanasius of Alexandria helped to spread the concept of monasticism, particularly in Western Europe via its Latin translations. He is often erroneously considered the first monk, but as his biography and other sources make clear, there were many ascetics before him. Anthony was, however, the first known ascetic going into the wilderness (about ad 270), a geographical move that seems to have contributed to his renown. Accounts of Anthony enduring supernatural temptation during his sojourn in the Eastern Desert of Egypt inspired the often-repeated subject of the temptation of St. Anthony in Western art and literature.

Famously, Anthony is said to have faced a series of supernaturaltemptations during his pilgrimage to the desert. The first to report on the temptation was his contemporary Athanasius of Alexandria. It is possible these events, like the paintings, are full of rich metaphor or in the case of the animals of the desert, perhaps a vision or dream. Some of the stories included in Saint Anthony's biography are perpetuated now mostly in paintings, where they give an opportunity for artists to depict their more lurid or bizarre interpretations. Many artists, including Martin Schongauer,Hieronymus Bosch, Dorothea Tanning, Max Ernst, Leonora Carringtonand Salvador Dalí, have depicted these incidents from the life of Anthony; in prose, the tale was retold and embellished by Gustave Flaubert in The Temptation of Saint Anthony. Emphasis on these stories, however, did not really begin until the Middle Ages, when the psychology of the individual became of greater interest. 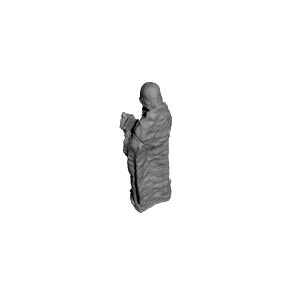 ×
0 collections where you can find Saint Antoine at The Louvre, Paris by Scan The World