3D
360°
Scan The World
1,411 views 37 downloads
2 collections
Community Prints Add your picture
Be the first to share a picture of this printed object
0 comments

Saint Catherine of Alexandria, or Saint Katharine of Alexandria, also known as Saint Catherine of the Wheel and The Great Martyr Saint Catherine (Coptic: Ⲙⲁⲅⲓⲁ Ⲕⲁⲧⲧⲣⲓⲛ; Greek: ἡ Ἁγία Αἰκατερίνη ἡ Μεγαλομάρτυς "Holy Catherine the Great Martyr"; Latin: Catharina Alexandrina), is, according to tradition, a Christian saint and virgin, who was martyred in the early 4th century at the hands of the pagan emperor Maxentius. According to her hagiography, she was both a princess and a noted scholar, who became a Christian around the age of 14, converted hundreds of people to Christianity, and was martyred around the age of 18. More than 1,100 years after Catherine's martyrdom, Joan of Arc identified her as one of the saints who appeared to and counselled her.

The Eastern Orthodox Church venerates her as a Great Martyr and celebrates her feast day on 24 or 25 November, depending on the regional tradition. In Catholicism she is traditionally revered as one of the Fourteen Holy Helpers. In 1969 the Roman Catholic Church removed her feast dayfrom the General Roman Calendar; however, she continued to be commemorated in the Roman Martyrology on 25 November.[6] In 2002, her feast was restored to the General Roman Calendar as an optional memorial. 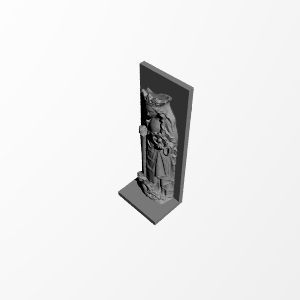 ×
2 collections where you can find Saint Catherine by CEG