Saint Catherine at the Louvre, Paris

3D
Scan The World
3,531 views 207 downloads
1 collection
Community Prints Add your picture
Be the first to share a picture of this printed object
0 comments

Saint Catherine at the Louvre, Paris

This dramatic statue by French sculptor Thomas Regnaudin (1622-1706) is a self-proclaimed allegory of hope for the church. Regnaudin was a late Baroque sculptor  for the French nobels. This piece reflects his idealism interacting with the cynicism of the Baroque. Although it does not show a woman interacting with death, it is a tribute to the martyr, and reflects a woman’s faith through the ultimate sacrifice.

Church tradition has crowned St. Catherine as one of the most renowned female saints of the early church. Her legendary faithfulness through torture was blessed by a profound testimony that rings clear through the ages; a young martyr in the 4thCentury at the hands of Emperor Maxentius, she became a Christian at the age of fourteen. With parents who governed Alexandria, she soon became renowned for her beauty and intellect, which she sharpened with a deep study for the arts, sciences, and philosophies. She received a vision of the Virgin Mary presenting Christ to her in mystical marriage when she was a young teenager, which converted her to Christianity. After her conversion, she determined to remain a virgin her entire life. She was a contemporary of Emperor Maxentius, who persecuted Christians; she visited him and debated with him in an attempt to change this policy and end the persecution of the church. Maxentius pitted the best and brightest of the Roman philosophers and academicians against her, but she won the debate and converted them all to Christianity. Maxentius proceeded to kill them all in a rage, and attempted to make Catherine recant through torture. After she rejected Maxentius’ subsequent marriage proposal, he ordered her to be killed by the spiked wheel, which miraculously broke when she prayed for rescue. When all else failed, Maxentius simply beheaded her. Although the historical accuracy of this account is highly debated and most current historians cannot find a historical counterpart which correlates with church tradition, her story is still an inspiring tale of devotion through persecution.

Regnaudin sculpted St. Catherine to be a “symbol of hope.” This seems odd at first glance because Catherine was ultimately beheaded; however, the construction of the piece illuminates the issue. Originally, Regnaudin placed her hand resting on a spiked wheel, which miraculously broke as a result of her prayer in the midst of torture. She lifts her eyes heavenward with her hand on her heart—the epitome of prayer and devotion. Her face appears lost in her mystical union with Christ; such is her faith in God that instruments of torture in this world cannot touch her. She is regal in her bearing and stands tall through difficulty. This is meant to inspire the viewer to hope through trials. This particular allegory of hope has had an unusual journey; it was orginally mounted in St. Catherine Hospital in Paris, France, and sometime in the 19thCentury, the broken wheel was replaced with an anchor. Due to the tumultuous nature of that century for the French nation, any number of explanations for this exchange arise, but the actual cause is unknown. It was moved to the Museum of French Monuments in the 18th Century, and later, to the Louvre. Even with the anchor, it remains a symbol of hope. Her hand rests on an anchor just as her soul rested in Christ, the Anchor of faith.

Regnaudin himself may not have been a believer, but it appears that he was commissioned to sculpt a statue for St. Catherine’s Hospital, which housed a number of charitable institutions through the years. Since the Baroque era is characterized by growing tensions and a desire to question traditional authority, many artists who created faith-related artwork merely used the stories as allegories for various virtues. Perhaps Regnaudin simply found the legend of St. Catherine inspiring and decided to sculpt an example of living, other-worldly hope. Whatever his personal beliefs, Regnaudin choice to use a woman as a symbol of hope is not a-typical—throughout much of the history of art, women are used as symbols of various virtues. This trend may find its origins in the code of chivalry of the Middle Ages which elevated women as unattainable beacons to fight for in their Virgin-like purity. Wherever its origins, it is a trend that establishes women as an ideal; it is an optimistic perspective on suffering that shows a woman encountering death and overcoming it through faith. 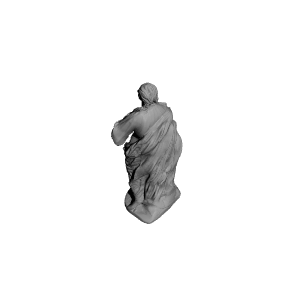 ×
1 collections where you can find Saint Catherine at the Louvre, Paris by Scan The World