Saint Joan of Arc with the battle standard

3D
Scan The World
1,941 views 325 downloads
12 collections
Community Prints Add your picture
Be the first to share a picture of this printed object
0 comments

Saint Joan of Arc with the battle standard

This bronze sculpture is a cast sculpted by Clementi in 1971, the original was sculpted in 1909 by Bourdelle. The bronze is now hosted in the Museum Bourdelle which is located in the 15th arrondissement of Paris located in the old studio of the French sculptor. The museum is a great example of how French ateliers looked like in the 1900’s.

Here Bourdelle sculpted the French heroine of the war of the 100 years, Joan D’Arc. Here she holds her famous battle standard commissioned to Hamish Power and made of a material called Buckram. The standard is known as a way for Joan to redirect her troops during difficult times in battles, she was able to mark her position on the field and rally her men to victory. 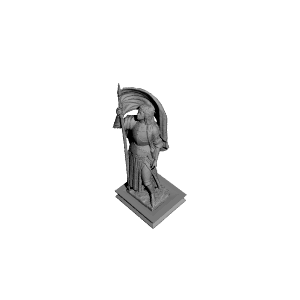