3D
Scan The World
2,275 views 94 downloads
Community Prints Add your picture
Be the first to share a picture of this printed object
0 comments

Paul the Apostle (c. 5 – c. 67), commonly known as Saint Paul, and also known by his native name Saul of Tarsus was an apostle (though not one of the Twelve Apostles) who taught the gospel of the Christ to the 1st-century world. He is generally considered one of the most important figures of the Apostolic Age. In the mid-30s to the mid-50s AD, he founded several churches in Asia Minor and Europe. Paul took advantage of his status as both a Jew and a Roman citizen to minister to both Jewish and Roman audiences.

According to writings in the New Testament, Paul was dedicated to the persecution of the early disciples of Jesus in the area of Jerusalem. In the narrative of the book of Acts of the Apostles (often referred to simply as Acts), Paul was traveling on the road from Jerusalem to Damascus on a mission to "bring them which were there bound unto Jerusalem" when the resurrected Jesus appeared to him in a great light. He was struck blind but, after three days, his sight was restored by Ananias of Damascus, and Paul began to preach that Jesus of Nazareth is the Jewish Messiah and the Son of God. Approximately half of the book of Acts deals with Paul's life and works.

Fourteen of the twenty-seven books in the New Testament have traditionally been attributed to Paul. Seven of the epistles are undisputed by scholars as being authentic, with varying degrees of argument about the remainder. Pauline authorship of the Epistle to the Hebrews is not asserted in the Epistle itself and was already doubted in the 2nd and 3rd centuries. It was almost unquestioningly accepted from the 5th to the 16th centuries that Paul was the author of Hebrews, but that view is now almost universally rejected by scholars. The other six are believed by some scholars to have come from followers writing in his name, using material from Paul's surviving letters and letters written by him that no longer survive. Other scholars argue that the idea of a pseudonymous author for the disputed epistles raises many problems.

Today, Paul's epistles continue to be vital roots of the theology, worship, and pastoral life in the Catholic and Protestant traditions of the West, and the Orthodox traditions of the East. Paul's influence on Christian thought and practice has been characterized as being as "profound as it is pervasive", among that of many other apostles and missionaries involved in the spread of the Christian faith. Augustine of Hippo developed Paul's idea that salvation is based on faith and not "works of the law".Martin Luther's interpretation of Paul's writings influenced Luther's doctrine of sola fide. 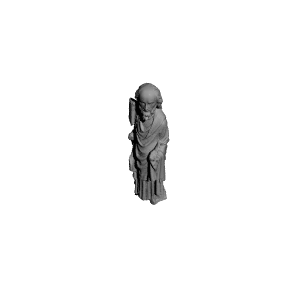 ×
0 collections where you can find Saint Paul at The Musée des Beaux-Arts, Lyon by Scan The World