3D
Scan The World
3,800 views 392 downloads
1 collection
Community Prints Add your picture
Be the first to share a picture of this printed object
0 comments

This sculpture and the one of Saint Peter (to be scanned) were commissioned to Mochi by monks of Saint Paul's Basilica, in order to be placed either side of the altar.

Both stages were refused by commissioners and were bought by Pope Alexander VII in 1657 and placed on the external facade of the 'Porta del Popolo' in Rome. In 1980 the sculptures were removed and brought to the Palazzo Braschi due to natural erosion.

Paul the Apostle (Latin: Paulus; Greek: Παῦλος, translit. Paulos; c. 5 – c. 67), commonly known as Saint Paul, and also known by his native name Saul of Tarsus (Hebrew: שאול התרסי‎, translit. Sha'ul ha-Tarsi‎; Greek: Σαῦλος Ταρσεύς, translit. Saulos Tarseus) was an apostle (though not one of the Twelve Apostles) who taught the gospel of the Christ to the 1st-century world. He is generally considered one of the most important figures of the Apostolic Age. In the mid-30s to the mid-50s AD, he founded several churches in Asia Minor and Europe. Paul took advantage of his status as both a Jew and a Roman citizen to minister to both Jewish and Roman audiences. 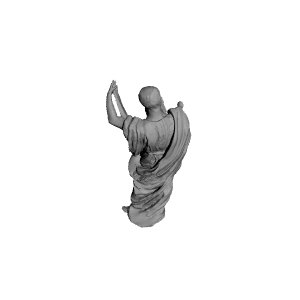 ×
1 collections where you can find Saint Paul at The Palazzo Braschi, Rome by Scan The World