3D
Featured Scan The World
2,509 views 551 downloads
1 collection
Community Prints Add your picture
Be the first to share a picture of this printed object
0 comments

According to legend, St. Sylvester cured the emperor Constantine of leprosy and then received the papal tiara. During his pontificate, he would have attended the conversion of the emperor to Christianity. He also managed to muzzle the Capitol Dragon, a monster represented at his feet like a domestic animal. The face of the saint, delicate features, is close to the real portrait. This statue would come from the rood screen, or choir fence, the cathedral Saint-Rombaut in Mechelen, demolished in 1664. 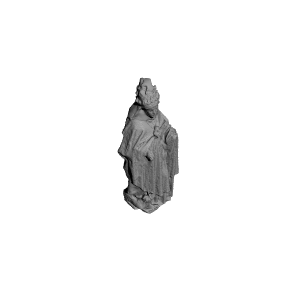 ×
1 collections where you can find Saint Sylvester by geoffrey.marchal