Saint Valerie holding her head in her hands at The Louvre, Paris

3D
Scan The World
3,425 views 96 downloads
Community Prints Add your picture
Be the first to share a picture of this printed object
0 comments

Saint Valerie holding her head in her hands at The Louvre, Paris

This sculpture depicts a Roman period martyr called Saint Valerie who, when refusing to be forced to marry a Pagan, was beheaded. Directly acter her execution she carried her head and presented it to the bishop who converted her to martyrdom. The most obvious parallels to the legendary figure of St. Valerie are those that manifest the distinctive trait of cephalophory. France is fairly rich in these, including most notably the capital's patron saint, Denis. The severed head that goes on preaching is a powerful assertion of autonomy, or perhaps theonomy in the face of persecution, with the bishop Denis continuing his work of prophecy and preaching. In St Valerie's case, the severed head is returned to where it belongs, the deceased person's bishop, pastor and confessor. In both cases there is a continuity in the relationship to the Church beyond death.

The more basic theme of decapitation widens the field of comparison greatly. An obvious source of parallels is thedeuterocanonical book of Judith, in which we find a young woman pledging herself to virginity after seducing and decapitating a tyrannical enemy of the faith, and presenting his head to her countrymen. The mythemes are differently configured, but there seem to be a similar underlying concerns in which the faith community is threatened by both persecution and exogamy.

The most obvious parallels are perhaps with the Biblical and post-Biblical narrative of John the Baptist. Here we find not only a beheading, but a problematic marriage (with suggestions of incest rather than exogamy), defiant denunciation of tyranny, a centrally-important young woman and presentation of the head to a third party. Here, however, the threat to the faith community seems to come from inside. The thematic parallel, nevertheless, was strong enough for the builders to back St Valerie's shrine in St Michel des Lions with a fine stained glass window depicting John the Baptist.

A Cephlaphore is a saint who is generally depicted carrying his or her own head; in art, this was usually meant to signify that the subject in question had been martyred by beheading. This sculptural style was very popular in France. Handling the halo in this circumstance offers a unique challenge for the artist. Some put the halo where the head used to be; others hasve the saint carrying the halo along with the head. 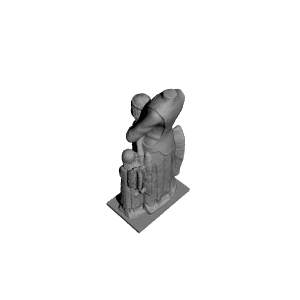 ×
0 collections where you can find Saint Valerie holding her head in her hands at The Louvre, Paris by Scan The World