Sakhmet at The British Museum, London

3D
Scan The World
8,070 views 653 downloads
5 collections
Community Prints Add your picture
Be the first to share a picture of this printed object
0 comments

Sakhmet at The British Museum, London

The Egyptian goddess Sekhmet was associated with destruction. According to myth, she was the fiery eye of Re, which he sent against his enemies. In this form she also appeared as the cobra on the brow of the king, rearing to protect him. Her name means 'she who is powerful'. She is represented as a lioness-headed woman, perhaps because the Egyptians observed that it is the female lion who is the hunter.

King Amenhotep III (1390-1352 BC) obviously especially revered Sekhmet, as he had an enormous quantity of statues of her erected in his mortuary temple in Western Thebes. There may have originally been 730 statues (one seated and one standing for each day of the year). They might have been part of a ritual intended to pacify the fiery goddess. Nearly 600 of these statues have now been accounted for; The British Museum has fragments of over 20, the largest collection outside Egypt, where a considerable number of the original group can still be seen in situ.

In the statues shown here the head of the goddess is surmounted by a sun disc and she clasps the symbol of life (the ankh) in one of her hands. The standing versions also hold a sceptre in the form of a papyrus. One of the seated statues is inscribed on the throne-front with the king's names and a dedication to 'Sekhmet, who smites the Nubians'.

Sekhmet was increasingly represented as an aggressive manifestation of the goddess Mut. Many of the statues were later moved to the precinct of the Temple of Mut at Karnak by the priest-king Pinudjem I (around 1050 BC). 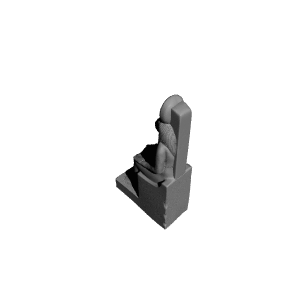 ×
5 collections where you can find Sakhmet at The British Museum, London by Scan The World