3D
Scan The World
4,129 views 218 downloads
Community Prints Add your picture
Be the first to share a picture of this printed object
0 comments

Salabhanjika or Shalabhanjika refers to the sculpture of a woman, displaying stylized feminine features, standing near a tree and grasping a branch. The name of these figures comes from the Sanskrit śālabhañjikā meaning 'breaking a branch of a sala tree'. They are also known as madanakai, madanika or shilabalika.

The shalabhanjika is a standard decorative element of Indian sculpture, a graceful stone sculpture representing a young female under a stylized tree in various poses, such as dancing, grooming herself or playing a musical instrument. The salabhanjika's female features, like breasts and hips, are often exaggerated. Frequently these sculpted figures display complex hairdos and an abundance of jewelry.

The shalabhanjika concept stems from ancient symbolism linking a chaste maiden with the sala tree or the asoka tree through the ritual called dohada, or the fertilisation of plants through contact with a young woman. The symbolism changed over the course of time and the shalabhanjika became figures used as ornamental carvings, usually located in the area where worshipers engage in circumambulation, near the garbhagriha of many Hindu temples. Placed at an angle, salabhanjika figures also were used in temple architecture as a bracket figures (like the western version, a caryatid). 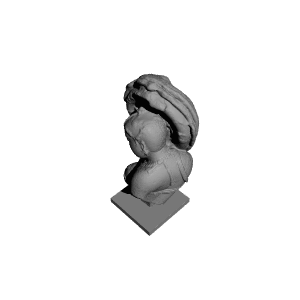 ×
0 collections where you can find Salabhanjika (Tree Goddess) at the Guimet Museum, Paris by Scan The World